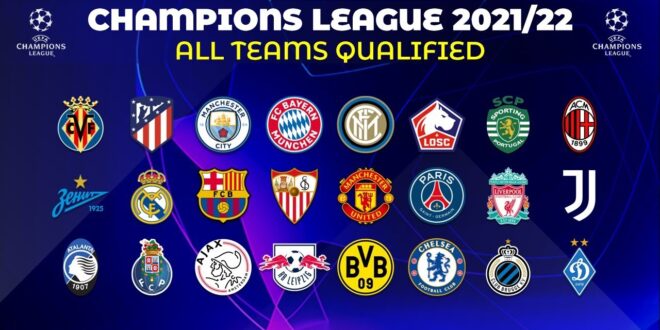 The Champions League remains the most prized possession in European football and in the midst of an eye-catching summer transfer window, there will be a number of contenders in with a shout of winning the competition.

Chelsea won the competition last season after beating Manchester City 1-0 in the final in Porto and both sides remain two of the favourites to be crowned champions of Europe this time around.

English football has dominated this competition in recent years with two of the last three winners being Premier League representatives. Additionally, five of the last eight Champions League finalists have been English clubs, though it is not an English side that is favoured this year.

Paris Saint-Germain’s stunning transfer window has inserted them as the favourites this time around and plenty of money has been wagered on them already.

If you are interested in betting on the Champions League and want the best of all free bets available in the industry then head to Max Free Bets. They are your one-stop resource for all of the best betting offers and free bets from the UK’s best-betting sites, online bookmakers and betting apps.

Continue on to learn the current bookmakers’ favourites for this season’s Champions League.

It really looks to be a case of now or never for Paris Saint-Germain, whose desperate attempts to win the Champions League have led them to an enormous summer splurge on new players. It’s arguable that no club has ever had a better summer transfer window than PSG this summer, having added Lionel Messi, Sergio Ramos, Gianluigi Donnarrumma, Georginio Wijnaldum and Achraf Hakimi to their ranks. Those signings will now compliment their overwhelming berth of talent including Neymar, Kylian Mbappe and Marquinhos and the strength of this squad makes it no surprise to see them as favourites.

Last season’s runners-up are fancied as the second-favourites to win the Champions League this season. Like PSG, City has made a big splash of their own in the transfer market, albeit adding just one big name at the time of writing. Jack Grealish has signed for £100m and they are still chasing Tottenham and England star, Harry Kane. Should they pull off the latter transfer they could well become level with PSG on the odds front due to the greater continuity in their squad. The City regularly competes on multiple fronts thanks to their strength in depth and many will feel the Champions League is their main priority after falling at the final hurdle last time out.

Perennial dominators of the Bundesliga, Bayern Munich are always one of the most fancied teams to win the Champions League. Their most recent success came in 2023 and the core of that side still remains intact, while they have also added RB Leipzig centre-back Dayot Upamecano. New coach Julian Nagelsmann comes with a big reputation and plenty of excitement surrounding him in what should be another trophy-laden season for the German giants.

Reigning Champions League holders Chelsea are the fourth-favourites as they look to become only the second club to win the competition in back-to-back years in the Champions League era. Real Madrid is the only other team to achieve the feat but many at Chelsea will be feeling quietly confident after appearing to fill a significant hole in their squad. The signing of Romelu Lukaku will give Chelsea a proven goalscorer after Timo Werner’s struggles and the Belgian international scored four goals in five appearances in Europe last season.

Liverpool is a real unknown quantity on all fronts heading into the 2023/22 season. Injuries were a huge disruption to their hopes the last term, though they will now be able to call upon the likes of Virgil van Dijk, Joe Gomez and Jordan Henderson once again after long-term injuries. The Reds made back-to-back finals in 2018 and 2019, winning the latter against Tottenham Hotspur in Madrid and boast an excellent record in Europe under Jurgen Klopp. Add to that the fact that Mohamed Salah and Sadio Mane both had a full summer break to rest and this is a team that could really make some noise in the Champions League this season.

Manchester United have arguably had the best summer transfer window outside of PSG in the Champions League after adding Raphael Varane and Jadon Sancho to their ranks. Ole Gunnar Solskjaer’s team have improved in each season that he has been in charge but the Champions League is one competition they have really failed to make an impact in under his tutelage. United failed to make it out of the group stages last season after finishing behind PSG and RB Leipzig in their group, thus entering the Europa League. They went on to be runners-up in that competition after losing to Villarreal on penalties in the final but there is no doubt they have a better squad coming into the new season.

No team has dominated the Champions League over the last decade or so like Real Madrid but as their odds suggest, this is not the Madrid side of that previous era. However, Carlo Ancelotti has now returned to the Spanish capital has been the architect of the first of their four Champions League victories in five years back in the 2013/14 season. Ancelotti won 89 of his 119 games in charge during his first two-year stint as Madrid boss but will be without defensive stalwarts Sergio Ramos and Raphael Varane, both of whom have left the club over the summer. Getting the best out of Eden Hazard will likely be key to Madrid’s hopes after two extremely underwhelming, injury-hit seasons from the Belgian star. He featured in just 43 games in his first two seasons at the club and will need to help Karim Benzema shoulder the load in terms of the team’s attacking output.

How the Football Transfer System Works