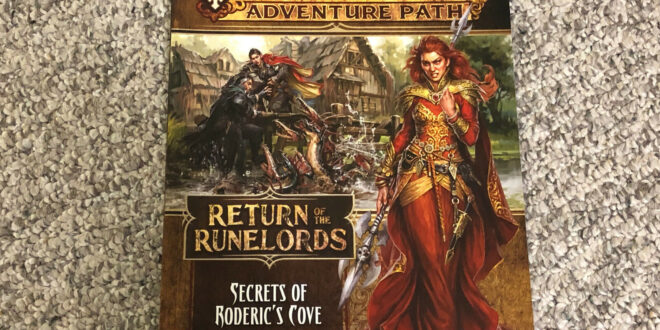 The Pathfinder game was created by Paizo, and over the years, it has received a large number of new expansion adventures. Because of the way the game was made, it is very easy for the game masters, or GMs, to make new campaign-style adventures for players. Thanks to this feature, Paizo both innovated and perfected the “Adventure Path” model of the game.

Pathfinder Adventure Path is a series of six monthly softcover books that each have 96 pages. Each volume gives you one piece of the adventure path and a couple of background articles for the GMs to implement it. These six parts have one overall theme, as well as a story, tying everything into a great campaign. The campaign starts at level 1 and takes the players to high teens.

These Adventure Paths are the flagship of the RPG, meaning they are the most important part of the game. They were the first to be named “Pathfinder”, and the first four paths with a total of 24 volumes came out before the game was released, and they were written within the rules of D&D 3.5.

Ten years after this initial move, there are dozens to choose from. In this article, we will go over all of them and see what makes them different.

The first one is still the very best in some parts, especially because it was updated and re-released. Rise of the Runelords (RotR) begins goblins and then quickly introduces many elements of horror that bring with them epic combat with giants and other monsters. The story stretches and moves around the Lost Coast, which is a key geographical location of Golarion. It offers wonderful variety when it comes to gameplay, and adds much to the lore. All players should start with this one.

Curse of the Crimson Throne (February 2008)

We said that RotR dealt with the countryside. The second adventure is called Curse of the Crimson Throne (CotCT), and it is a city adventure. It was also treated with an updated hardback rerelease. The story revolves around a beautiful sinister queen who usurped the Korvosa throne, one of the most important cities in this fantasy world. From the underbelly of the city, you will move all the way to the throne room on your way to finish this adventure filled with surprising encounters.

The third Pathfinder Adventure Path takes you to the streets of Riddleport, after which you share adventures with the drow, dark elves of the Darklands (Underdark). For those who enjoy creepy adventures, SD is perfect. It did not, however, get a remastered edition, so balancing is needed.

Legacy of Fire (LoF) was the final adventure that used Dungeons & Dragons 3.5 rules. Also, it was the first to show off the true variety of adventure types that the world of Golarion is capable of. The story here begins in the exotic desert nation Katapesh, which is a land of fortune and wonders. From this wonderful place, you will come across gnolls, genies and demi-planes. If you enjoy the Arabian Knights theme, you will have a lot of fun with this one.

The Nation of Cheliax is ruled over by a devil worshiper House of Thrune, in a story that is a gritty urban adventure dealing with organized crime, corrupt officials, and dangerous ancient curses. You will combat the forces of Hell in this installment.

With Kingmaker, the developers did something awesome, and therefore, this is a perfect example of what an open world, “sandbox” adventure can be like. The story is set in the infamous Stolen Lands of the River Kingdoms. Players must grow and manage their own kingdom and defend it from monsters and bandits. If you and your friends are about more than simply battling enemies, create and rule your own stronghold and try something new with this game.

This adventure starts with a shipwreck and becomes a dangerous race to find the lost city that is somewhere deep inside the jungle of Mwangi Expanse (Congo). A powerful race of serpent people rules it. You can see how distinct these stories have been so far, and the trend continues onward.

The Whispering Tyrant has been described as the most notorious villain in this world, and this is exactly whom the players go up against here. The story is set in Ustalav, a region of Golarion that resembles and is inspired by Transylvania. Paizo entered the gothic horror genre with this one.

Jade Regent (JR) reintroduces the beloved NPCs from the first AP, Rise of the Runelords AP. This makes Jade Regent somewhat of a sequel. One of the NPC becomes aware that her birthright is the throne of the ancient Dragon Empires of Tian Xia. With this one, the game visits the eastern Asian cultures of this world, similar to our own. The current ruler, the cruel Jade Regent, does not want to give up his throne.

As evident from the title, this is a true pirate adventure that gives players the opportunity to command their own pirate fleet, and battle other sea dogs for plunder. Alongside the previous installment, this is when Paizo decided to fully support these Apps. They began releasing map packs, painted miniatures, and more to expand the overall world.

Remember how the Jade Regent had familiar elements from Rise of the Runelords? Well, Shattered Star is a true sequel that expands the story of the mysterious Runelords. Also, it incorporates elements of the second and third installments, Curse of the Crimson Throne and Second Darkness.

The story follows the agents of a new Pathfinder Society lodge located in Magnimar. They learn about a fragmented artifact that has been scattered throughout the world of Golarion. The players have to gather the seven fragments of the Shattered Star through the elements of the classic elements of dungeon crawling.

This winter-based Adventure Path story deals heavily with the famed legend of Baba Yaga. It is a twisted fairy tale with some elements of time travel, and it allows you to battle Witch Queen Elvanna and prevent her from controlling the realm. Paizo shows great care for this story.

This AP introduced mythic rules to the Pathfinder game and allowed the players to advance to very high levels and gain godlike powers. To counterbalance this change, the story introduced demonic hordes and demon hosts to battle at every corner.

Paizo decided to treat the players with the long-awaited Ancient Egypt theme with this one. The story is set in the Osirion region, where vaults and tombs have been opened to outsiders for the first time in centuries. Many of these buried secrets mean no good for the world, and the players must stop them.

This story pays respect to the classic Dungeons and Dragons adventure, Barrier Peaks. It takes place in Numeria, a region of the world that hosted the Rain of Stars, an event that scarred the surrounding lands. The area now holds fragmented remains of a starship from far away stars, which scattered technological ruins everywhere. At the moment of the story, barbaric tribes and sinister spell casters occupy these places.

Another D&D classic received an homage here, this time Against the Giants. The story starts deep inside the orc country, in a village called Trunau. It grows ever bigger until it reaches the Storm Tyrant, a giant who wants to bring all of his kin against the small folk in the world.

This story-driven campaign has a rebellion in Cheliax at its center. You start the game by forming a ragtag group of resistance fighters. The fourth book is the 100th volume of the Pathfinder Adventure Path line. Therefore, it features an additional 32 pages, including a longer than usual adventure and a retrospective of all the 16 previous installments. Lastly, it includes an NPC for each.

If you ever wanted the bad guys to win, this is the story for you. The premise of this fun adventure takes place at the same time as Hell’s Rebels adventure, and it focuses on evil characters.

This is a Cthulu themed adventure that draws inspiration from the rich Lovecraftian universe. These include elder gods and the Necronomicon, and the players get to succumb to insanity caused by the tendrils of deep horrors that want to overtake their very beings.

This story is a tribute to the Keep on the Borderlands classic adventure. The story features hordes of invading hobgoblins, and the players have to gather against them through the wilderness and use guerrilla warfare tactics while they scramble their numbers and resources to counter-attack and retake their conquered lands.

This is a mashup of the Atlantis elements and those from the colony of Roanoke. Players come as the second wave of colonists and are immediately forced to investigate the fates of the unlucky first colonists.

While the political scene in the Golarion kingdom of Taldor becomes chaotic, the players act as agents and saboteurs for Princess Eutropia who wants to secure her claim to the throne, and once and for all prevent a civil war that looms ever closer.

Return of the Runelords (August 2018)

Return of the Runelords is the 23rd overall Pathfinder Adventure Path. It continues the fan-favorite Runelords storyline from Rise of the Runelords and Shattered Star, commands it served to complete the so-called “Runelords Trilogy.”

The 24th and the newest Pathfinder Adventure Path was the one that used the First Edition rules of this RPG. The story is in the nation of Druma, where a lich by the name of Whispering Tyrant was imprisoned by the Paladins of Lastwall. Something will set it free, and the players must act fast to get him back under guard.

Thanks to the great success of this series, more Adventure Paths with the second edition of rules are sure to come in the next months and years. Paizo has practically borrowed elements from every possible fantasy flavor for their RPG, and all that is left is to keep waiting and playing the older ones until the new ones come again.