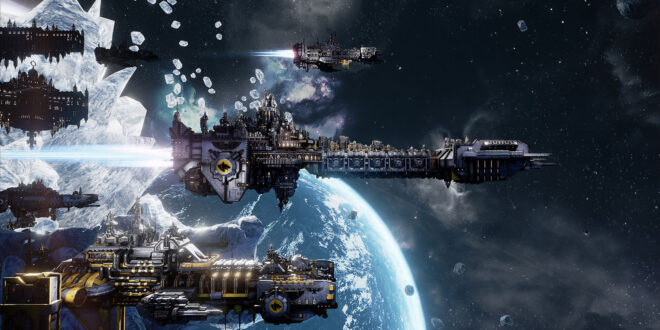 The Space Marines who are also known as Adeptus Astartes are mostly known as being the defenders of humanity, and one of the best of the Emperor of Mankind’s warrior. They don’t really resemble humans anymore, they are seen as superhumans since they have been changed and altered to be better in all aspects of a human. They would go through strict training, psycho-conditioning and gene modification.

Space Marines are resistant to any natural disease be it a plague or cancer and can live through any wound that would end a normal human’s many times over, and would get to continue fighting. Their most recognizable feature is probably the Power Armor they wear and the amazing weapons they tend to have with them.

They see themselves as being who is above normal humans. They see normal humans as frail, weak creatures who give into temptation, greed and other negative emotions – emotions that do not affect the Space Marines.

Their work ethic and faith in the emperor has given us some amazing quotes and sayings. Let’s look at some and see if we can find something really interesting.

“Wherever and whenever they appear they leave only destruction in their wake; they are the Lords of Death, Bringers of War. The Dark Angels.”

“Consider the Predator. Let your soul be armored with Faith, driven on the tracks of obedience which overcomes all obstacles, and armed with the three great guns of Zeal, Duty and Purity.”

“I have seen my share of death, both honorable and despicable, and yes, I know that war is a brutal, bloody business capable of bringing out the best and the worst in men. This is a harsh, dangerous galaxy, with untold terrors lurking in the dark to devour us, but the minute we turn on our own kind and murder them, we might as well take a blade to our throats.”

“All of creation suffers young ones. Only in accepting our own mortality can we make a difference. Only in bearing the burden of our failures can we find the strength to go on. Only in detachment from glory, or honor, or jealousy… from life itself can we hope to spare others from grief.

We are Doom Eagles. And we are dead already.”

“Forget all your preconceptions of war, of battle-lines clashing in the churned ground. Your mission is to attack before the foe even realizes that the war has begun, to strike hard at those vital weaknesses that all armies possess, but that no commander will admit to. Under my tutelage, you will learn how to seek out such fragilities and smite them with every weapon at your disposal. Master these duties and I will have nothing more to teach, and you will truly be a Space Marine.”

“I believe in three tenets of battle – firepower, firepower, and more firepower. Should the Omnissiah have wished otherwise, he would not have provided me with such a mighty tool as the Razorback. I long for the day in which my entire Chapter can ride to war in transports such as these, vehicles whose rage can be given voice through their sanctified armament.”

“This place was built to destroy something precious to us, something each of us shares, no matter which Primarch or Chapter we call our own. I speak of brotherhood. Bile has isolated us, severed all but the most cursory of contacts. He sows distrust and suspicion, wears you down with the slow grind of mindless days and tormented nights. The bastard wants you to believe you are forgotten. He lies. I am here to tell you that he lies and lies! Look within yourselves, brothers, and you will understand. You have been waiting for this day, even if you did not know it. This day, when you are reminded of who you are. My purpose here is the same as yours, to serve the God-Emperor and Holy Terra! Know that each of you is the harbinger of your own freedom! I say to you all that this day, we are not Blood Angels, Doom Eagles, Space Wolves, Taurans, Salamanders, Crimson Fists… We are one great legion, one heart and one mind! We are the Adeptus Astartes, the Space Marines, the war gods and the terrible swift sword of our Emperor! We are His will, and we have always been so!”