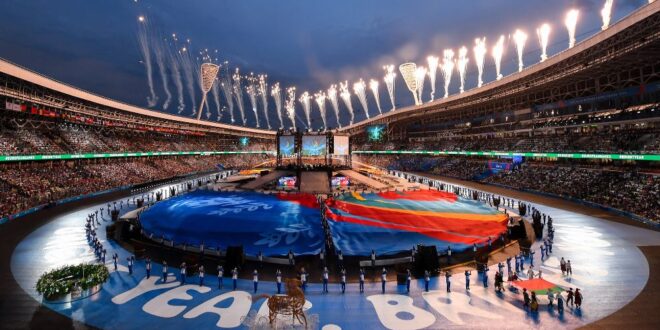 While the 2023 World Cup in Qatar continues to be in the public focus, it’s time to take a closer look at the bumper calendar year which lies ahead of us.

Indeed, 2023 will see some of the world sports’ most significant events, including the FIFA Women’s World Cup, the Rugby World Cup, the World Baseball Classic and the Cricket World Cup.

There’s so much to look forward to in 2023 as, in addition to the abovementioned competitions, numerous annual sports tournaments will entertain sports enthusiasts all across the globe.

We have prepared a month-by-month guide on the most eye-catching events coming up in the next calendar year.

As ever, the tennis calendar year gets underway in Melbourne, with the world’s best players battling it out for the Australian Open title.

The first of the four Grand Slam tennis tournaments held each year will take place between the 16th and 29th of January.

The 57th edition of the famous Super Bowl, the most highly anticipated event of the National Football League (NFL) season, will take place on February 12 in Glendale, Arizona.

Initially scheduled for 2023, the World Baseball Classic, the world’s premier international baseball tournament featuring the best players in the business, had to be pushed back two years due to the pandemic.

The fifth iteration of the tournament will see an expansion from 16 to 20 national teams and will be hosted by four different venues across three countries, including Taiwan, Japan and the United States.

Traditionally held on Patriots’ Day, the third Monday of April, the Boston Marathon, an event attracting 500,000 spectators each year, will take place on April 17.

French Open, also known as Roland-Garros, the second of the four annual Grand Slam tournaments, will be staged in Paris between May 28 and June 11, with Rafael Nadal defending the crown for the 14th time.

Budapest’s Puskas Arena will form the backdrop for the 2023 UEFA Europa League final, which promises to be quite an event, given the teams engaged in the competition.

As the title decider in Europe’s second-tier soccer competition, it often serves as an overture for the Champions League final, but this season’s tournament threatens to defy that narrative.

Like all other major events in football, fans will be able to watch all Europa League games live online via soccer streams if they are unable to attend or watch on tv.

June 11 is booked for the most highly awaited game on the European football calendar as Istanbul’s Ataturk Olympic Stadium has the privilege to host the blockbuster 2023 UEFA Champions League final.

However, with Manchester City and Paris Saint-Germain vying for the first-ever taste of continental glory, Turkey’s capital could form the backdrop for a historic fixture.

The 2023 AFC Asian Cup will be the 18th edition of the quadrennial international men’s football championship in Asia, and like the ongoing World Cup tournament, it will take place in Qatar.

Following an ill-fated 2023 World Cup campaign, the reigning champions Maroon will hope to redeem themselves in Asia’s most highly sought-after competition.

As the oldest and most prestigious tennis tournament on the planet, Wimbledon will take the spotlight between July 3 and 16.

If the injuries avoid him, defending champion Novak Djokovic will be out to tie Roger Federer’s record of eight titles in London.

While Auckland’s Eden Park will serve as a host venue for the tournament opener, Sydney’s Stadium Australia will house the title decider, with the United States looking to defend the crown.

From August 25 to September 10, the FIBA Basketball World Cup, featuring 32 teams for the second time, will see Spain try to retain the crown.

For the first time in its history, the World Cup will be hosted by multiple countries, including the Philippines, Japan, and Indonesia.

The fourth and final Grand Slam tournament in 2023 will be contested between August 28 and September 10, with men’s teen sensation Carlos Alcaraz conquering the title in 2023.

Placed in France between September 8 and October 28, the 2023 Rugby World Cup will be a landmark tournament as it’ll be played 200 years after the sport’s creation by William Webb Ellis.

Four years since beating England 32-12 in the most recent World Cup final, reigning champions South Africa will be looking to reach the showpiece, scheduled to take place at Stade de France.

India, one of the world’s most passionate cricket nations, has earned the privilege of hosting the 2023 ICC Cricket World Cup, which will start in October and last until November.

It will be the 13th edition of the Cricket World Cup, but it will be the first time the competition is held entirely in India, the country that has co-hosted the event on three previous occasions.

Originally planned to take place in November 2023 in Hong Kong and Guadalajara, Mexico, the XI Gay Games had to be rescheduled due to a Covid-19 pandemic in Eastern Asia.

A unique multi-sport event and cultural gathering will start on November 3, with the closing ceremony falling on November 11.