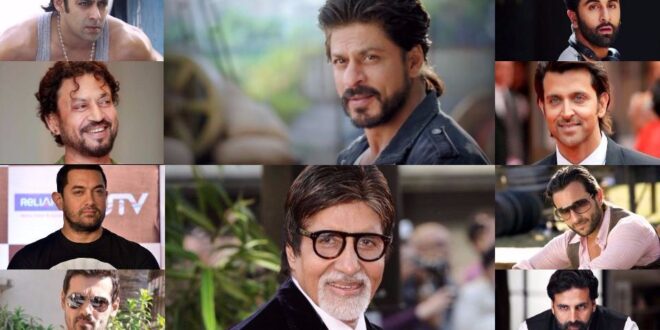 If you are just starting to discover the world of Bollywood cinematography, you are not only going to enjoy their unique movies and one of a kind plots but if we are being honest, you are also going to see many attractive actors. Let’s be honest, when it comes to discovering new movies, some people start by googling their favorite performers and watching the films they have been in. For this reason, we have come up with the list of most handsome Bollywood actors, and hopefully, you are going to see some of the best motion pictures of all time.

However, before we start, there is one thing that we have to tell you. If you have never seen a single movie of this production before, you are probably going to be surprised by the original music that is created solely for the purpose of taking your viewing experience to the next level. There are complete soundtracks with original tunes that come with each film, and some of the songs have become popular all around the world. If there is a number that has been stuck in your head, the best way to find it is on the pagalsongs website.

We have to start our list with Dev Anand because he is considered to be one of the most successful actors in Bollywood with a career that spanned over 60 years. He appeared in over 100 movies from the mid-40s to his final performance in the film called “Chargesheet” in 2011.

Most fans will tell you that he was characterized by a unique way of talking and walking, but also a beautiful smile. Besides being one of the best in this line of work, during the 1960s he was considered to be a male fashion icon.

Bachchan is not only one of the most handsome Indian actors of all time, but he is also one of the most appreciated and awarded performers. He rose to fame in the early 1970s with movies “Sholay”, “Zanjerr”, and “Deewaar”.

Up until now, he has played over 200 roles and has been involved in many, many movies. What’s more, he has seven films coming out this year. How fascinating is that? There is no doubt that he is best known for his acting roles, but Bachchan is also a producer, a TV host, a playback singer, and a former politician.

For his contribution to the arts, the Indian Government awarded him with Padma Shri, in 1984, the Padma Bhushan in 2001, and the Padma Vibhushan in 2015. In addition, he was also honored with Dadasaheb Phalke Award for lifetime achievement, four National Film Awards as the best actor, and many others.

Kumar is one of those performers whose popularity only grows with time. This 97-year old first appeared in the movie called “Jawr Bahta” in 1944, and there are over 65 films in his filmography. Some of the most famous ones are “Deedar”, “Daag”, “Naya Daur”, “Kohinoor”, “Gunga Jamuna”, “Karma”, and the last one being “Qila” from 1998.

He was the first person to win the Filmfare Best Actor Awards in 1954 and up until today, he won nine of these. Nowadays, this is the last living male actor from the Golden Age of Bollywood movies.

Kapoor was another highly beloved Indian actor and producer. He started acting when he was just a child and made his debut in 1948, in his brother’s movie called “Aag”. When it comes to his adult roles, the first one was in the 1961 film “Dharmputra”.

There is no doubt that this man left his mark in the Bollywood cinema. He was also honored by the Government of India with the Padma Bhushan and Dadasaheb Phalke awards in 2011 and 2014 respectively.

Mithun Charkaborty (born Gourang Chakraborty) is best known for his role of Jimmy in the film called
“Disco Dancer” from 1982. It had a commercial success not only in Indian but also in the Soviet Union and Russia. Some of his other famous movies include “Wardat”, “Saahas”, “Pyar Jhukta Nahi”, “Dance Dance”, and so on.

Since his debut in 1976 in a film called “Mrigayaa”, he has had over 350 roles, which is, you have to admit, quite impressive. When it comes to his awards, the most important ones are three National Film Awards and two Filmfare Awards. Actually, he received his first National Film Awards for Best Actor for his debut role.

Besides being an actor, singer, writer, and producer, he is also an entrepreneur, TV host, social worker, and a former Rajya Sabha Member of Parliament. There is even a comic book based on him – “Jimmy Zhingchak”.

Yes, we have another Kapoor on our list. Shahid began his career as a background dancer in the 1990s, and then in 2003 appeared in his first movie “Ishq Vishk”, a romantic comedy which won him his first award – Filmfare Award for Best Male Debut. After this, he was mostly recognized for role in romantic films, but he later appeared numerous thrillers and action movies like “R… Rajkumar”, “Kaminey”, “Udta Punjab”, and so on.

Syed Emraan Anwar Hashimi was initially and assistant director for the film “Raaz” that premiered in 2002 before making his acting debut in the 2003 thriller movie “Footpath”. Within only a year, he became one of the leading actors of Bollywood cinema, and clearly, ladies’ favorite.

Since, in the beginning, he only stared in romantic thriller movies like “Murder” and “Murder 2”, he got a title of the “serial kisser”. However, later, he appeared in other genres of films like “Ek Thi Daayan”,
“Once upon a time in Mumbai”, and “Shanghai”. Three of his new movies (“Mumbai Saga”, “Chehre”, “Ezra”) are set to premiere this year. In 2019, he also appeared in a fictional spy thriller web television series “Bard of Blood” in the lead role of Professor Kabir Anand/Agent Adonis.

To sum up, in this article, we have only introduced you to a couple of popular Bollywood actors. Since we have mentioned a number of their films, when it comes to getting familiar with Bollywood production, you might want to start by watching some of these.

Previous How Do You Transition Your Baby To A New Formula?
Next Strap-on Harness: The Secrets of the Right Choice