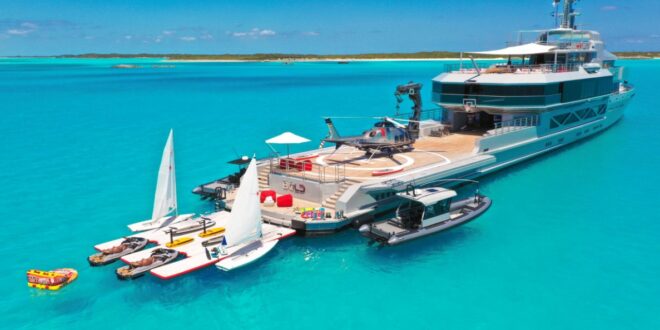 From Steamships to Luxury Yachts ─ A History of Maritime Advancements

Do you know when the first-ever ship was made? From the first steamships to luxury yachts, ships have improved and upgraded over time. It is incredible how maritime technology has advanced and invented such groundbreaking vessels.

If you’re a ship enthusiast, we have prepared something special for you today. We want to talk about the history of maritime advancements and describe how nautical technology has come so far over the years.

The maritime industry has come a long way since the early days of steamships. In this article, we will look at the history of naval advancements and how ships have improved from steamships to luxury yachts.

Steamships: When and How They Appeared

The history of steam-powered vessels is an old and revolutionary one. The first steamship, ‘’The Clermont,’’ was built in 1807 by Robert Fulton, which changed how people thought about transportation. Visit here for more information.

Steamships are powered by steam engines. These engines use heat to create pressure and power the ship’s propellers. Before that, ships were powered by wind or oars and were limited to sailing along coastlines.

But with the advent of the steamship, people could now travel anywhere they wanted without worrying about winds or currents. Maritime transportation was revolutionized. Steamships quickly became popular, and by the mid-19th century, thousands of them were plying the world’s waterways.

Some of the most notable steamboats include the SS Great Britain, the first iron-hulled ship; the CSS Virginia, the first steam-powered warship; and the RMS Titanic, the largest passenger steamship ever built.

The development of the steamship was a significant turning point in maritime history, and it paved the way for further advancements in ship design and technology. It changed marine transportation in many ways.

After that, it was full steam ahead towards the next maritime invention (pun intended). Let’s check out the advancements that followed these revolutionary vessels.

In the late 19th century, a new type of engine was developed that would change maritime transportation yet again. This was the diesel engine, an internal combustion engine that uses diesel fuel.

Diesel engines are more efficient than steam engines and can generate much more power. They quickly became popular in a variety of industries, including maritime transport.

Diesel-powered ships are faster and can carry more cargo than their steam-powered predecessors. They also produce less pollution, which is important for the environment.

Some of the most famous diesel-powered ships include the Queen Mary and Queen Elizabeth, the largest passenger ships ever built.

The Rise of the Cruise Ship

The cruise ship is a relatively new invention, dating back only to the early 20th century. However, it has quickly become one of the most popular types of boats in the world.

The first cruise ship was the Prinzessin Victoria Luise, built-in 1901. It was a small ship with a capacity of about 180 passengers and 161 crew members.

However, cruise ships quickly grew in size and popularity. By the 1930s, there were dozens of them plying the world’s oceans. One of the reasons for their popularity is that they offer a unique and luxurious travel experience. Cruise ships are like floating resorts, with all sorts of amenities and activities available onboard.

Today, the cruise ship industry is booming. There are now hundreds of cruise ships sailing the world’s oceans, catering to every type of traveler. Cruise ships have become increasingly luxurious and elaborate over time. Some are almost like small cities, with tens of thousands of passengers onboard.

The Luxury Yacht: The Ultimate in Maritime Luxury

In the 21st century, the most advanced and luxurious type of ship is the yacht. These vessels are designed for leisure and pleasure and come in all shapes and sizes. Yachts can be either motorized or sail-powered, but most modern yachts are motorized.

Yachts come in many sizes, from small boats that can fit in a garage to massive vessels. Some yachts are so large that they have their own helipads, swimming pools, and tennis courts! They truly are floating palaces.

If you want to experience the ultimate in maritime luxury, chartering a yacht is the way to go. You can sail to any destination in the world and enjoy all the amenities these ships offer.

The Future of Maritime Advancements

The maritime industry is always evolving, and new technologies are constantly being developed. What will the future of maritime transportation bring?

One possibility is the development of hybrid ships, combining the best features of diesel-powered and electric-powered vessels. These ships could travel long distances without using any fossil fuels, which would be environmentally friendly.

Another possibility is the development of autonomous ships, which would be able to navigate without any human intervention. They would be able to travel independently, and they could potentially revolutionize maritime transportation.

We will just have to wait and see what the future has in store! The possibilities are endless.