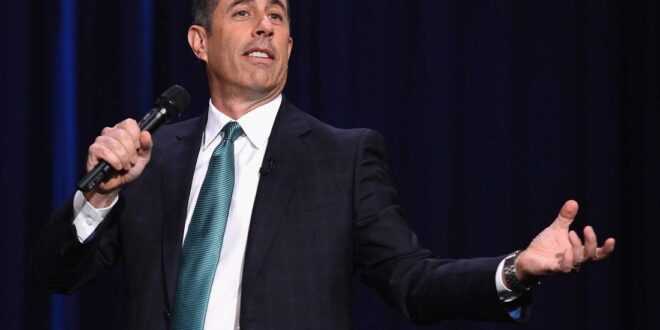 Jerry Seinfeld is an American comedian, actor, writer, producer, and director. He might be the best known for portraying a semi-fictionalized version of himself in the sitcom Seinfeld. He has frequently topped the list of the world’s highest-paid comedians. Let’s learn more about his life, career, and earnings.

On 29th April 1954, in Brooklyn, New York, U. S., Betty, and Kalman Seinfeld brought their son Jerome Allen Seinfeld into this world. His father used to collect jokes that he heard while serving in World War II. His mother’s parents were from Aleppo, Syria, while his father was of Hungarian-Jewish descent. Both of his parents were raised in Jewish households. Seinfeld attended Massapequa High School on Long Island. When he was 16 years old, he volunteered in Kibbutz Sa’ar in Israel. He attended the State University of New York at Oswego, but after his second year, he transferred to Queens College, City University of New York. In 1976 he graduated with a degree in communications and theater. During his college years, Seinfeld was involved in several productions, and he wanted to become a stand-up comedian. He even appeared on open-mic nights at Budd Friedman’s Improv Club.

Seinfeld’s career began right after his graduation. In 1976, he attended an open-mic night at New York City’s Catch a Rising Star, which led to an appearance in a Rodney Dangerfield HBO special. Four years later, Seinfeld had a small recurring role on the sitcom Benson, but he was fired from the show. In 1981, he made appearances on The Tonight Show Starring Johnny Carson and Late Night With David Letterman. Jerry Seinfeld’s professional career breakthrough came when he co-created The Seinfeld Chronicles with Larry David in 1988. The show was later renamed to Seinfeld, and it was popular. Eventually, it aired around 180 episodes over 9 seasons, and today is considered to be one of the best shows ever created. The show starred Julia Louis-Dreyfus, Michael Richards, Jason Alexander, and Jerry Seinfeld. Seinfeld was the only actor to appear in every episode of the show. The 1950s sitcom The Abbott and Costello Show was an inspiration for Seinfeld’s show. After the show ended, Seinfeld returned to stand-up comedy, and that’s when he recorded I’m Telling You For The Last Time.

In 1993, Seinfeld’s book Seinlanguage was released. The book was a bestseller. Nine years later, he wrote the children’s book Halloween, which was illustrated by James Bennett.

When he was 38 years old, Seinfeld started dating a high school student Shoshanna Lonstein, who was 17 years old at that time. They were together for four years. In 1998, he met a public relations executive for Tommy Hilfiger, Jessica Sklar, who was married to Eric Nederlander. Seinfeld and Sklar fell in love, so she divorced her husband, and in 1999, Seinfeld and she got married. They share three children, a daughter Sascha, and two sons, Julian Kal and Shepherd Kellen.

Jerry Seinfeld’s net worth is estimated at up to $950 million.