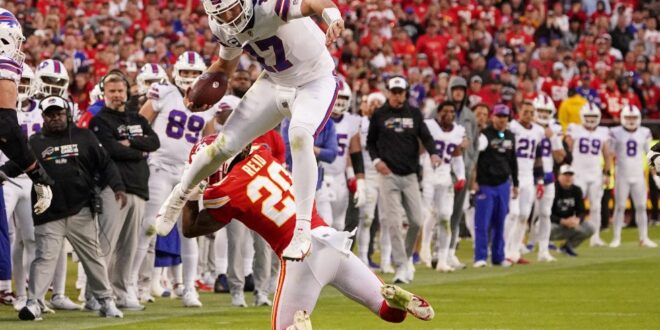 The 2023 NFL season has thrown up its fair share of surprises in the halfway stage of the campaign. The reigning Super Bowl champions the Los Angeles Rams have put forward a meek defense of their crown and are all but out of the race already. The Green Bay Packers and Aaron Rodgers are almost down and out too. Tom Brady and the Tampa Bay Buccaneers are struggling through their term, but are still in contention at the top of the NFC South, despite being far from their best.

The Philadelphia Eagles would not have been top of many pundits’ picks to win the Super Bowl at the start of the season, but they are making the strongest case in the NFC. The usual suspects of the last three seasons of the Kansas City Chiefs, Tennessee Titans and Buffalo Bills are the class of the AFC, although the Cincinnati Bengals, Miami Dolphins and Baltimore Ravens are well in contention too. It promises to be a thrilling race at the top of the NFL for the Vince Lombardi Trophy.

After 20 years of the New England Patriots’ dominance, there are few certainties about the NFL. It is a good thing to see and there could even be a team to make a breakthrough to end a long-standing Super Bowl drought. There is no shortage of contenders, but it will take composure and excellence to overcome years of failure. These are the teams that could be on their way to glory in the 2023 campaign.

The Vikings have failed to win the Super Bowl in their history, but their win on the road over the Buffalo Bills could signal that they are ready for a potential charge. Kevin O’Connell’s men are backed in the Super Bowl odds at +1200 with the leading betting sites to win the crown, which would be a remarkable achievement for the rookie head coach. Minnesota have not been outstanding, but have done enough on a weekly basis to move into contention for the top seed in the NFC Conference.

It is the 2017 season all over again as the Vikings and the Philadelphia Eagles appear to be on a collision course. The Vikings lost in the 2017 NFC Championship Game as the Eagles charged on to the Super Bowl and claimed the crown. Minnesota will be desperate for revenge and they seem to have an air of a team of destiny, squeezing out victories in remarkable fashion. Against the Bills, for example, Justin Jefferson made a sublime catch on fourth down before the side recovered a fumbled snap by Josh Allen, and then picked off the Bills quarterback in overtime to seal the win at Orchard Park.

There is a good blend of talent and experience in the ranks, but a lot will rest on the shoulders of quarterback Kirk Cousins to prove that he can win close games in the playoffs. He watched Matthew Stafford win a championship last season, and he could be the next quarterback to prove his doubters wrong.

The Vikings need to defy a lot of history to get over the line, but if they keep winning those close games it might be enough when it matters the most.

The Bills must likewise attempt to overcome their past demons if they are to win the Super Bowl for the first time. No team in the history of the NFL has been teased more than Buffalo’s fanbase, reaching the Super Bowl four times in a row in the 1990s, only to lose all four games, including a heartbreaker in the 1990 when Scott Norwood missed a field goal to win the title. Their poor fortune and lack of clinical edge under pressure was again on display against the Kansas City Chiefs last season in the Divisional Round. Buffalo took the lead with 13 seconds left on the clock, but then allowed Patrick Mahomes to work his team into position for a game-tying field goal before winning the game in overtime.

There have been too many incidents of that nature surrounding the Bills of late, notably their defeat to the Vikings through Allen’s errors that could cost them home-field advantage. They will have to call on deeper resources if they are to get over the line and stave of any self-sabotage in the vein of their mistakes against the Chiefs and Vikings.

Between Allen, Stefon Diggs and Von Miller, Sean McDermott’s men have three of the best players in the league. But, as a team, the Bills need to learn how to deliver in key moments. There is a lot of pressure on them to win the Super Bowl amid the weight of expectations. How they cope with the pressure will determine whether they can finally put a Lombardi Trophy on display in Orchard Park.

The Dolphins have not won the Super Bowl since 1973 and are the upstart team that are flying under the radar in the AFC. They can use that to their advantage down the stretch due to the talent of their offense. Quarterback Tua Tagovailoa has found his form for the Dolphins after looking well off the pace in his first two seasons in the NFL.

Miami can blow teams away with the quality of their offense, with head coach Mike McDaniel living up to his reputation as an offensive genius. McDaniel has enjoyed a similar rise to Sean McVay, whose ingenuity lifted the Los Angeles Rams out of their slump and into one of the best teams in the NFL before their title win last season.

The Dolphins have the talent on offense to match the Bills, Chiefs, Bengals and Ravens in the AFC. Tyreek Hill is a superstar and has been well worth the high price that Miami paid to acquire him in a trade deal with the Chiefs. Jaylen Waddle is also blossoming into one of the best receivers in the NFL. Miami needs to play four perfect games to reach and win the Super Bowl, but unlike the past they at least have a shot.

Previous Why Has Digital Coaching Become So Popular in Tech?
Next Some Popular Party Venues Near Me