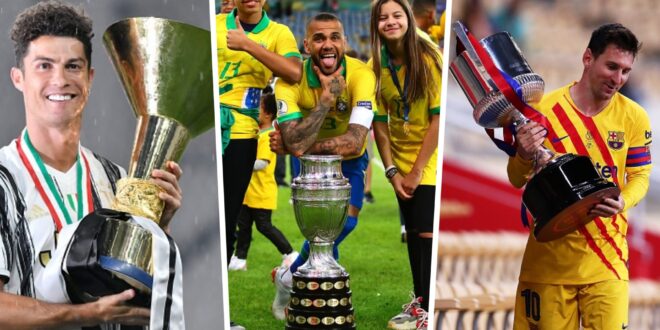 10 Players Who Have Won the Most Trophies in Football History

Whether football or any other sport, the thrill of winning a trophy is unparalleled. Football is a sport that has been glorified by its excellent players who are famous throughout the world. There have been players who dominated the field, but there are many who failed to win any accomplishments. There have, however, been a few well-known players who have mastered the art of triumphing and gone on to win multiple trophies throughout their careers. In this article, we’ll discover who in football has won the most trophies.

With an astonishing 43 trophies won at both the club and international levels, Dani Alves da Silva, more commonly known as Dani Alves, is a former Brazilian international who currently plays for Fc Barcelona in Spain. He holds the record for most awards won by a player in football history.

Like his former teammate, Lionel Messi has won every title there is to win with a club. One of the greatest players in history, Lionel Messi, has been essential to Barcelona’s extraordinary success. During his 19-year tenure with Barcelona, he enjoyed a number of personal accomplishments, including 10 Spanish title wins and four Champions League victories.

2023 was a special year for Lionel Messi because he won his first important international trophy with Argentina. The only prize missing from his trophy case is the World Cup, which is yellow and gleaming.

The third-most-trophies-won player in football history is the Spanish defender Gerard Pique. A total of 37 trophies have been added to Gerard Pique’s trophy case since his senior debut for Manchester United in 2004. He achieved success in 2008 with the Red Devils, winning the Premier League and the UEFA Champions League. The 2007 FA Community Shield was again claimed by Pique.

There is no need for an introduction to Cristiano Ronaldo trophies because his on-field achievements speak for themselves. The legendary Portuguese player has triumphed in competitions held in Italy, Spain, England, and elsewhere. In particular, he has an unrivaled fondness for the UEFA Champions League and has won it five times in his storied career.

Xavi Hernandez is the manager of FC Barcelona at the moment. Xavi, a well-known Spaniard, is currently in command of FC Barcelona. He was a master of the midfield and one of the greatest trophy winners in history.

Alves played a significant role in Guardiola’s Barcelona team’s 2009–10 sextuple-winning campaign. He also competed for Spain’s national team, which won the 2020 World Cup and two Euros. Xavi might add a few more trophies to his collection while serving as manager of Barcelona. Xavi and Zlatan Ibrahimovic, a Swedish legend, each have 33 victories.

In the glorious history of Manchester United, Ryan played more games and received more awards than any other player.

Throughout his career, which lasted 963 games over 24 years and included 64 caps for his native Wales, he never left Manchester United and represented them exclusively. He stands as the most decorated player in the league and for Manchester United, with 34 career trophies.

Maxwell, a former left-back for Barcelona and PSG, won 37 cups with five different clubs. With his childhood team Cruzeiro, Maxwell won his first trophy in the Copa does Brasil in 2000. He continued to receive praise after relocating to Ajax and won the league double in his first campaign. Additionally, he won five cups during his brief time with Inter Milan. He also enjoyed success at Barcelona, when he captured his lone UEFA Champions League championship.

Andres Iniesta is a legendary player who was instrumental in the club’s winning numerous titles. The Blaugrana’s star player was the graceful midfielder. He also contributed to Spain’s three-title run in four years by playing at the same caliber for them.

Iniesta, who scored the game-winning goal against the Netherlands in the 2010 FIFA World Cup final, was named the game’s most valuable player. In the EURO 2012 championship match against Italy, he also received the honor. In the 2004–2005 season, he won the La Liga championship with Barcelona, with whom he went on to win 31 more trophies. This includes, among other things, eight La Liga and four Champions League championships. Two trophies have been won by Iniesta with his current club, Vissel Kobe.

Hossam Ashour, an Egyptian midfielder who now plays for Al Ahly, holds the record for most titles won by a single player in a club with 39. Before joining Al Ittihad in 2020, he played for the team from 2003 until 2020. More than 500 club appearances in the Egyptian League have been made Ashour.

Thirty-four titles in total have been won by the renowned goalkeeper over their career. He competed for FC Barcelona and FC Porto, respectively.

Football is a sport that requires teamwork; hence the players’ collective success determines whether they win trophies. While this is the reality, a few players have played for outstanding teams and won numerous championships as a result. Only a small number of competitions are played by players with their national teams. Football players, therefore, win the majority of their trophies with their clubs.

Naturally, athletes that compete for some of the top clubs in Europe end up with a lot of medals. It is well known that athletes with resumes like Lionel Messi’s and Cristiano Ronaldo’s have won numerous awards.