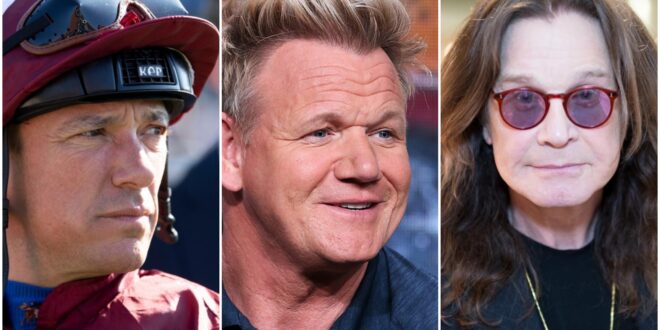 Ramsay, Ozzy & Dettori – What Do They Have In Common?

What these three celebrities have in common may not be so easily guessed – unless you are playing online slots. Ramsay, Ozzy and Dettori are just a few celebrities with their “own” slot game and more will follow. Gone are the days when online casino games had a bad reputation. Today celebrities are happy to be associated with the gaming industry. Game developers are looking for new ideas and “celebrity-themed video slots” have turned out to be very popular. What’s more, celebrities are lining up wanting to be one. This is not a bad thing by any means, especially if you are a fan of celebrities and their trademark catchphrases or attitudes. In 2023, there are actually quite a few video slots on the market today that are based on celebrities, which is what we will be exploring in this short article.

Some of these slots are actually pretty hilarious too, depending on the theme of the game. As you will notice while we run through the games, there are different providers behind the titles and therefore different features. So, take it all in and check out which of these video slots might appeal to you!

That’s right, this opinionated and rather loud-mouthed celebrity chef got his very own Gordon Ramsay “Hell’s Kitchen” game earlier this year. The game is based on the popular TV show, “Hell’s Kitchen”, a reality show about the management of his restaurants. If you’ve ever watched the show, it is full of rants and interesting situations. Ramsay is famous for coming up with off the cuff remarks about people’s abilities and appearance, especially in the cooking department. You will enjoy all of these catchphrases and famous quotes within this slot game, and apart from this humorous aspect, there’s quite a lot going on in the game.

Ramsay partnered up with NetEnt for this slot to hit the market, and it is a modern-day 5×3 reel game. While spinning the reels, you’ll see Ramsay whizzing by, along with some Hell’s pitchfork logos accompanying Ramsay and setting you up for some exciting wild symbols. Within the game, there are clips of Ramsay’s best moments from Hell’s Kitchen, and these are often shown when you actually lock-in any of the available bonuses.

Love him or hate him, it’s undeniable that this video slot is full of excitement and humorous Ramsay moments and Ramsay seems to enjoy his new gaming ventures and has applied for a trademark that will cover casino and gambling products.

From one foul-mouthed British man to another, Ozzy Osbourne is another character with his own slot game. Hailed as ‘The Prince of Darkness’ during his music career, you’ll find that many of his famous songs have made their way onto the game, and it follows quite an ominous theme, as one might imagine. Aside from his reputation as being the Prince of Darkness, Osbourne is perhaps more famous for his slack-style of talking, and his outbursts that are engulfed with cuss words. After all, this is what gives his video slot game a bit of spice to it.

NetEnt is behind this game as well. It was released at the end of 2019 and it’s their 4th title in their game series”NetEnt Rocks” where Ozzy joined Guns N’Roses, Jimi Hendrix, and Motorhead. The game has some special features and potentially high winnings, or as NetEnt said when they released the game: “Just like with Ozzy, you never know what you’re going to get”. This essentially means that you’ll enjoy plenty of extra chances to win on this game, and of course, this goes hand in hand with the Ozzy personality. For a full description of the Ozzy Osbourne slot game, we can recommend this article at GamblersBet.

Unlike the previous two guys who definitely hold celebrity status for music and cooking, Dettori holds celebrity and indeed legend status for his horse racing career. He is one of the best that there has ever been, and Playtech really has excelled with the development of this game. Dettori is a rather extravagant character, which is why this slot game is full of interesting symbols, racing clips, and more. It is actually a jackpot game, which makes things even more interesting, especially considering that the jackpot is often into the seven-figure range.

This game is laced with awesome features too, including two bonus rounds, and the ability to gamble your winnings after each spin. Would you have guessed it, the legendary Dettori serves as the wild symbol for this game too, so you are always treated to the ever-smiling and upbeat Dettori while you play. It was released in 2010 and is still very popular.

While these three games have sprung up thanks to Playtech and NetEnt, there are other game developers that are trying to produce celebrity-themed games too. It’s definitely a category of gaming that has proved to be very popular among casino enthusiasts, and as the months continue to roll by, we feel that more and more titles will reach the libraries of major online casinos.

These games always provide a nice twist compared to just regular video slots, and if you are someone who likes to get involved with a slightly different way of gaming, these are definitely video slot games that you should check out.