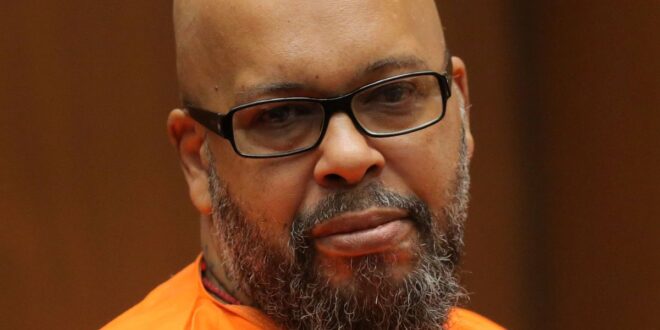 If you’ve been following the old school hip-hop game in any way, you’ve probably heard about Suge Knight. Born in Compton, the center of the West-Side gangsta rap movement, he was a key person in launching some of the most iconic rap careers of the time. He is a co-founder of Death Row labels, famous for working with rap legends like 2pac, Snoop Dogg, Dr. Dre, Mc Hammer, and many others. His career was clouded with numerous controversies and ultimately had a bad ending.

He eventually lost his record label and even declared bankruptcy at one point. He was accused of many violent altercations through the years and eventually got charged with voluntary manslaughter. As of now, he is serving his 28-year sentence in San Diego.

So many people wonder, considering his turbulent career, how much is he worth as of today? Well to answer this, let’s analyze his career and life first.

Suge Knight was born as Marion Hugh Knight Jr. in the city of Compton. His professional name originates from a childhood nickname. He was set to start a footballing career but later decided to start a music label, as the rap scene started to grow more and more. His label was somewhat successful, but the real beginning of his career can be traced to the founding of Death Row.

When members of the popular N.W.A Dr. Dre and DOC decided to leave Ruthless records, due to internal conflict between the N.W.A member, they worked with Suge Knight to form the Death Row records.

As the popularity of gangsta rap increased rapidly on the hip-hop scene, Death Row managed to become one of the most recognized record labels in the industry.

Rappers like 2pac, Snoop Dogg, and MC Hammer brought tons of success to the label as their albums and records achieved extreme popularity on the scene. At its peak, the label managed to earn over 450 million dollars.

Suge did have a lot of disputes with competitor record labels. The most notable example is his feud with the Bad Boy label where he criticized their producer Puff Daddy for “dancing in every video”.

The tensions between the west and east side rappers were slowly growing.

A lot of violence was included in the business as many of the rappers were involved with gangs. Suge Knight was known to be extremely violent and was often seen carrying a gun.

The murders of these two legendary rappers caused a lot of controversy for both Death Row and Suge. Many people, including 2pac’s close friend Snoop Dogg, accused Suge of being involved with the murders. He was never charged with anything, but the suspicions are still prevailing almost 30 years later.

Snoop Dogg and Dr. Dre who were one of the biggest stars soon left the record over contract disputes. This was one of the turning points for the label, as it was left without two of its most popular rappers.

The bankruptcy and the end of Death Row

In 2006, Suge filed for bankruptcy. The financial records at the time show that he had about 12$ in his bank account. He wasn’t doing a proper job in maintaining his finances and had a huge lawsuit against him. You can find more about this at follownews.com if you’re interested, but the main point is that he had huge financial problems which made him sell almost everything he owned. He lost his label and most of his belongings at this time.

Suge Knight had his share of legal problems, as he was known to enjoy violence. For example, he was accused of assaulting two young rappers in 1992, was charged with 7 years in prison for probation violation, sent to prison in 2003 for violating his parole, was involved in two altercations in 2008 and 2009 where he suffered injuries, and lastly got shot and injured in 2014 at a private party. He was also accused of domestic violence towards his girlfriend.

His violent nature is what ultimately cost him his freedom as he was arrested for voluntary manslaughter in 2015. He ran over two men with his car and ended up killing one of them. He claimed to have acted in self-defense, but the nearby CCTV footage proves something else. He was sentenced to 28 years in prison for the charges of voluntary manslaughter. He will be eligible for parole in 2037.

Well, his net worth is estimated to be around 200 thousand dollars. It’s a huge downgrade from the empire he once owned. At his prime, he was famous for lavish parties, owned 34 luxury cars, tons of expensive jewelry, and real estate including enormous homes, clubs, and party venues. His record was making millions upon millions of dollars, but he lost everything at the end. Even some of his clothes were auctioned off!

His career is extremely interesting. He went from having it all to now suffering in jail and losing most of his wealth.

Suge Knight was one of the central figures on the gangsta rap scene in the ’90s. He had huge success with his Death Row record label, but soon after the murder of Tupac Shakur, his career started to shift in another direction. His love of violence and his bad temper are what ultimately destroyed his career.

His career is one of the most turbulent and interesting ones in the music industry. Going from owning luxury cars, mansions, and jewelry to having to spend almost 30 years in jail is a shocking turn of events. He was an important name in the industry and has been portrayed in numerous biographical films over the years. His involvement in launching rapper careers like those of 2pac, Snoop Dogg, Nate Dogg, and many others is what he’s best known for. However, his violent tendencies and possible involvement in the death of 2pac and Biggie is something that will always come up whenever you talk about him. He is estimated to have a 200 thousand dollar net worth, which is an incredibly small amount when compared to what it used to be at his prime.

Previous 19 Things to do on the Weekend when You are Bored: