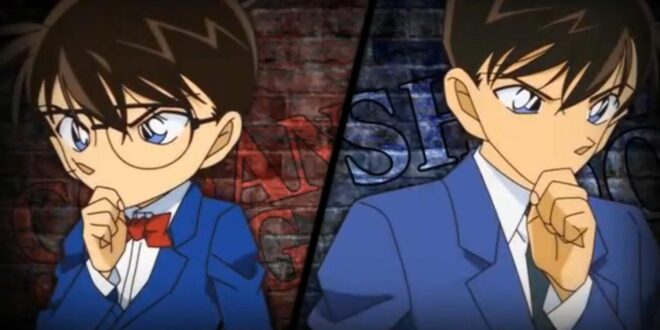 Detective Conan is a famous anime show that follows the adventures of a seventeen-year-old Kudo Shinichi who is a prodigy detective. During one crucial investigation, two thugs dressed in all black make him take an experimental poison. Instead of killing him, the mysterious poison turns him into a little boy.

In order to hide his identity from this evil organization, he takes up the name Edogawa Conan. His former girlfriend Mouri Ran and her private investigator father take him in. Trapped in this young body, Conan sends his time solving violent and mysterious crimes, and he is aided by kids in the Junior Detective League, as well as inventions by his friend Dr. Agasa. The show has been running for decades, and it has dozens of memorable episodes. In this article, we will go over the best ones.

In this episode, Akai appears in the back of Jodie’s car and shoots at the vehicles of the secret police. The bullet finds its way into a tire, and the FBI shakes off the secret police. At the Kudo family home, Amuro’s subordinates tell him that Akai was involved in a shooting and that cars crashed.

Later in the episode, Jodie’s car goes back to the crash site, after which Akai takes a secret police phone and speaks to Amuro (Bourbon). He informed him that it was wrong to let Conan find out about the nickname Zero. It turns out Akai knew all along who Amuro was.

The first mystery in the episode is that Kogoro is invited to a Halloween party on a cruise ship by Vermouth. All of the guests had costumes. Ran did not want to go, and Sonoko fills in. Shin’ichi is invited as well, and from Ai’s reaction, he understands that she is from the Black Organization. This new development is put on hold when a famous movie director has been murdered.

The second mystery follows Jodie and her memory flashbacks about a murder. While Ai is still sick, Dr. Araide plans to take her to a hospital. Before he arrives, however, Jodie drives Ai to meet him there. When Dr. Araide cuts them off on their way there, many interesting questions are finally answered.

These cases are connected in a way, and this two-hour special is an awesome episode.

In the third best Detective Conan episode, Amuro visits Okiya and begins to explain how two corpses were switched. One of them is Shuichi Akai who was shot in the head and burned along in his car at Raiha Pass. Amuro believes that Akai switched his own body with this one, and therefore is still alive.

He fully explains this intriguing scheme to Okiya, and meanwhile, Jodie believes in the same affair. Amuro further explains that it was actually Conan who made the swap and asks Okiya to remove the mask. He is certain Okiya is actually Akai.

In this exciting episode, the whole truth is about to come out. The identity of Bourbon will finally be revealed, and Conan is unable to do anything about it. The secret of Scar Akai is also revealed in the episode. The overall explosion of drama and controversy mixed with the truth change the whole storyline onwards.

The fifth best episode of the famous anime, Shuichi meets with Kir, which is actually a trap. Kir follows Gin’s instructions and eliminates the threat to the villainous Black Organization. FBI learns of this and Takagi confirms the death. Jodie is hit the hardest with the sad news. Vermouth notices her state while driving by, and says only one Silver bullet is needed instead of two. Jodie later puts a fake mobile phone in place of the one Conan uses. He, of course, notices this, but never says a thing.

These are only some of the best episodes of Detective Conan. Since the show has dozens of seasons, there are numerous awesome and intriguing episodes that will keep you glued to the screen with suspense and mystery. The show is definitely worth your time, especially if you like anime.