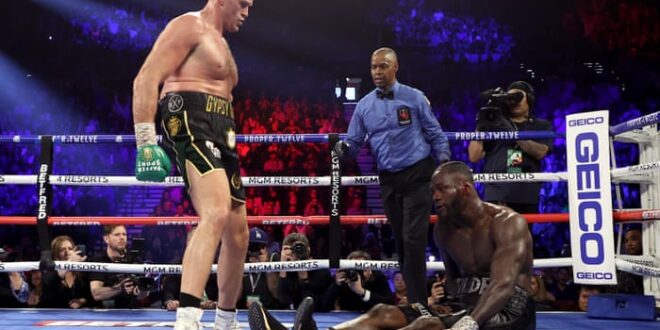 Will Tyson Fury’s WWE Obsession Cost Him His Boxing Career?

Tyson Fury is a man who loves to be the center of attention. Whether he’s dressed up as Batman for a press conference, singing in the ring at the end of one of his boxing matches, or participating in a ‘no holds barred’ documentary for British television, the World Heavyweight Champion of boxing enjoys being in the spotlight, and considers himself to be a showman as much as he does a fighter. He may very well be the best heavyweight boxer in the world, and he has the resume to prove it, but it doesn’t appear to be enough for him.

At some point in the next few months – nobody seems to be exactly sure when – Fury will meet American fighter Deontay Wilder for a third time in a little over a year. If Fury turns up fit, healthy, and focused on the job, he’ll win. He stopped Wilder in the second fight. The fact that the first fight was scored as a draw was considered by many in the sport to have been an injustice. Wilder is drinking at the last chance saloon, and another defeat to Fury will probably be the end of his career. The question of whether Fury will be in the right frame of mind for that fight is very much up for debate, though, because he appears to be involving himself in a potential wrestling match with reigning WWE Champion Drew McIntyre.

This situation dates back to April when Fury aimed a few social media messages in McIntyre’s direction after the big Scottish wrestler defeated Brock Lesnar to win the WWE Championship at WrestleMania. At the time, McIntyre barely acknowledged the messages. More recently, Fury has been trying to goad McIntyre into a fight yet again, and this time McIntyre responded in the affirmative. WWE wrestlers don’t put anything on social media without permission from the company that pays their salary. If McIntyre is suggesting that an in-ring confrontation with Fury might happen, it’s because WWE has already agreed on a deal that will allow that confrontation to happen.

Fury has form for this. If he and McIntyre were to step into the ring and wrestle each other, it wouldn’t be the first WWE bout of Fury’s career. Last year, the Gypsy King traveled to Saudi Arabia to fight fellow giant Braun Strowman. What goes on inside a WWE ring is scripted in terms of who wins or loses, but it was evident that Fury took the matter seriously. When non-wrestler athletes have taken to WWE rings in the past, they’ve usually kept their matches short or stuck to the talents they’re better known for. Fury demonstrated that he’d learned several professional wrestling moves and delivered a convincing wrestling performance that didn’t look out of place on the card.

He’d have had to have trained extensively to put the match together, and it’s unlikely he was training for boxing and wrestling at the same time. The Fury – Strowman match happened only four months before the second of the Fury – Wilder boxing matches, and many boxing insiders expressed concern that the British fighter was spending time in the theatrical realm of WWE instead of concentrating on his boxing. They were worried he would pay for his lack of focus. They were wrong then – but would Fury get away with it again?

The fact that Fury and McIntyre have started promoting a fight already suggests that it will happen in the not-too-distant future. WWE has a major pay per view in the shape of its annual “Survivor Series” scheduled for November. It’s also not out of the question that the company might visit Saudi Arabia again between now and November, international flights permitting. Theoretically, the third Fury – Wilder fight is scheduled for December.

If Fury wrestles and then boxes, he’ll be looking at a shorter time between the two matches. He also runs the risk of injury while training for wrestling – or even in the match – and missing his bout with Wilder. The people around Fury know better than to try to talk him out of an idea once he’s settled on it, but privately they’ll be very worried that his love of the spotlight might undermine his preparation for what will surely be a more determined, more focused Deontay Wilder.

Fury has exhibited a desire to be more than ‘just a boxer’ for his whole career, and perhaps for his whole life. He was named after Mike Tyson, who made multiple appearances in WWE during his own peak years and recently resurfaced in WWE’s rival company AEW. Tyson appeared in the ‘Hangover’ movies and has his own range of online slots, roulette, and blackjack games. It’s not very difficult to imagine Tyson Fury appearing in movies. It’s not very difficult to imagine Tyson Fury-themed boxing games appearing at online slots websites like OnlineSlotsUK either. The key difference – one that Fury would do well to bear in mind – is that Tyson was suspended from boxing when he made his first WWE appearance. He was long retired when he signed away his likeness to online slots websites. When he was in the ring, Mike Tyson was all about boxing. The rest of the circus came later. Fury is still in his prime and doesn’t need the distraction.

It’s possible that none of this matters. Tyson Fury is such a dominant boxer, and such an awkward fighter to compete against, that he might be capable of beating Deontay Wilder even if he isn’t on his A-game. He was overweight and full of ring-rust for their first fight and still took Wilder to the limit. In the second, lighter, and sharper, he blew Wilder away. It’s possible that a half-focused Fury might even be capable of beating fellow Brit Anthony Joshua and unifying boxing’s world heavyweight championship. It would be better for Fury and his own legacy if he didn’t leave such things to chance, though. If he’s prepared to focus for the next two or three years, he could leave a legacy of the kind that heavyweight boxing hasn’t seen for twenty years or more. The WWE ring will still be waiting for him when he hangs his gloves up – and so will any other form of entertainment he may want to try his hand at.